pgpool-II 3.5 is enhanced in many areas as previous major releases of pgpool-II. However this time pgpool-II enhances the performance in some use cases and this kind of changes are pretty rare in the pgpool-II history. Let's discuss performance of extended query protocol first.

Extended query protocol is used in many applications written in various languages and APIs including Java and JDBC. One of the benefit of it is, it allows to reuse query plans to save planning time. The other benefit is it could make queries more secure. The extended query protocol allows to use parameters for query. Without this, applications need to generate query string by themselves and may introduce famous SQL injection attack.

Why extended protocol is slow anyway?

However, pgpool-II needs to synchronize backend responses for internal processing. This is done by issuing additional Flush message in the each protocol phase, which requests response from backend. Problem is, this generates significant amount of network traffic and cause slowness of query execution through pgpool-II. 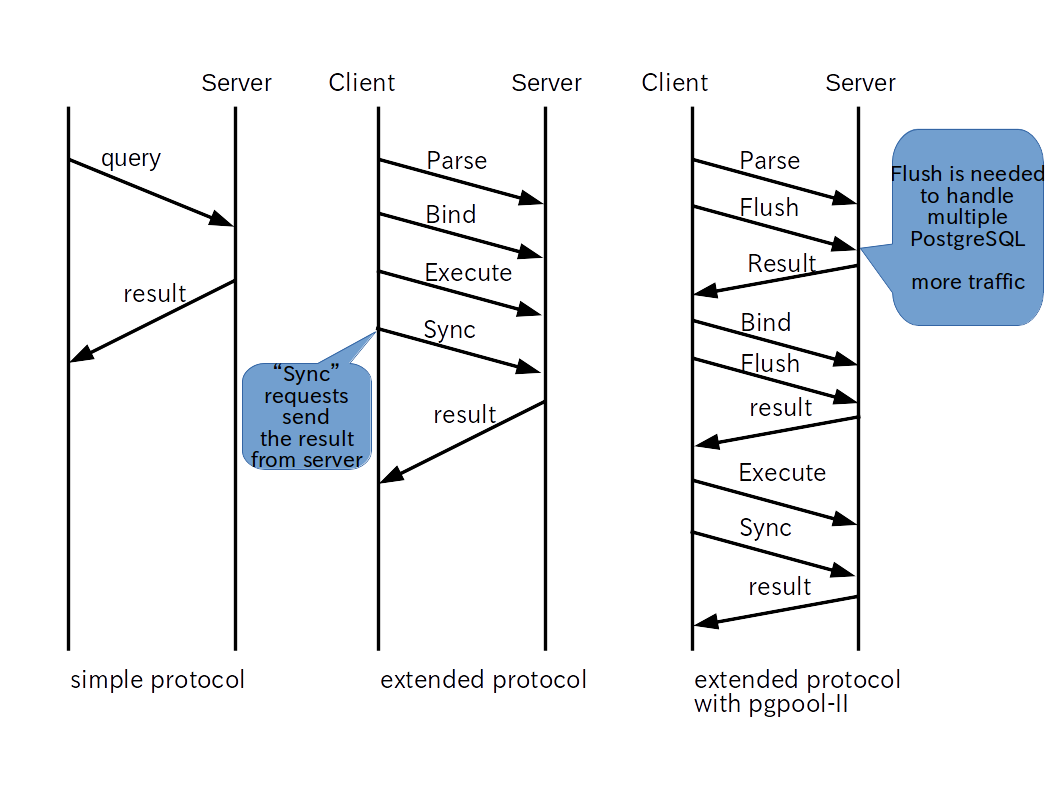 Diagram to explain why extended protocol is slow 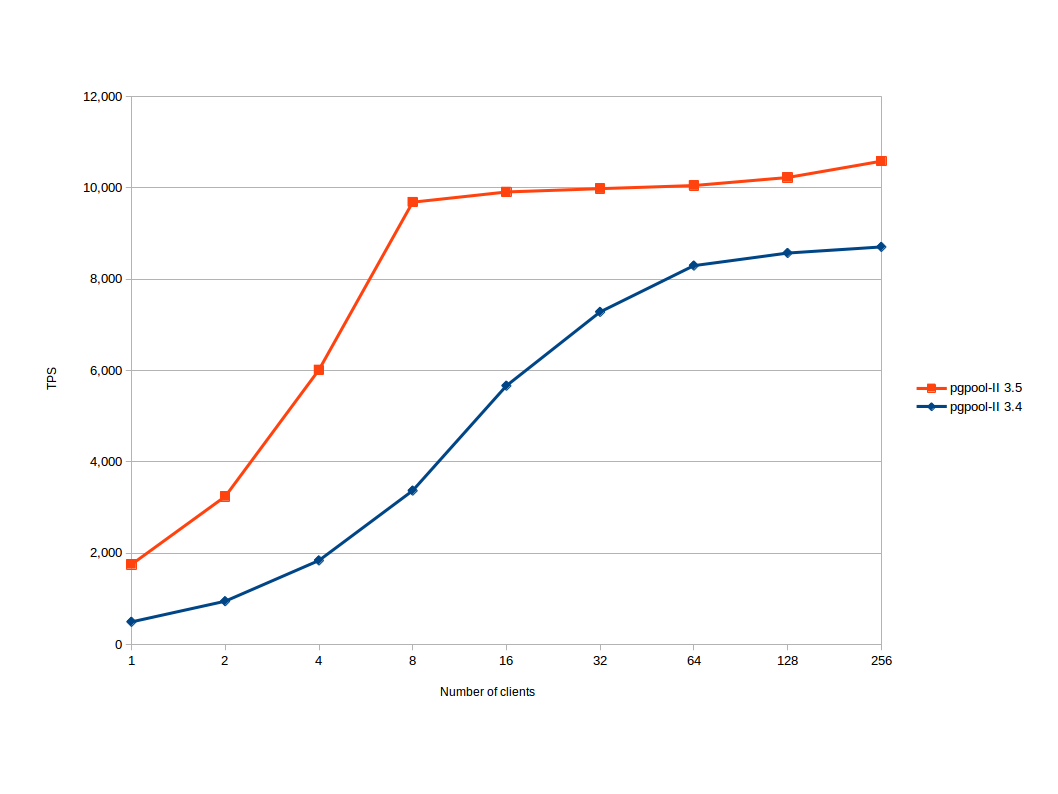 Pgpool-II 3.5 overcomes the weakness in some cases. In streaming replication mode, because pgpool-II does not need to sync each backend, pgpool-II 3.5 does not issue flush messages. This was not an easy project because pgpool-II's architecure prerequisite that backend responds each time when extended protocol messages was sent. The hard work is rewarded by significant performance improvement. We conducted a bench marking test on two AWS EC2 instances (m4.large) running on Cent OS 6 with PostgreSQL 9.4 being installed. pgpool-II and pgbench run on a separate AWS EC2 instance (m4.large). Bench marking shows that pgpool-II 3.5 is 20% to 250% faster than 3.4.

The performance of other mode (native replication mode and raw mode) remains same.

Pgpool-II has a problem called the thundering herd problem. 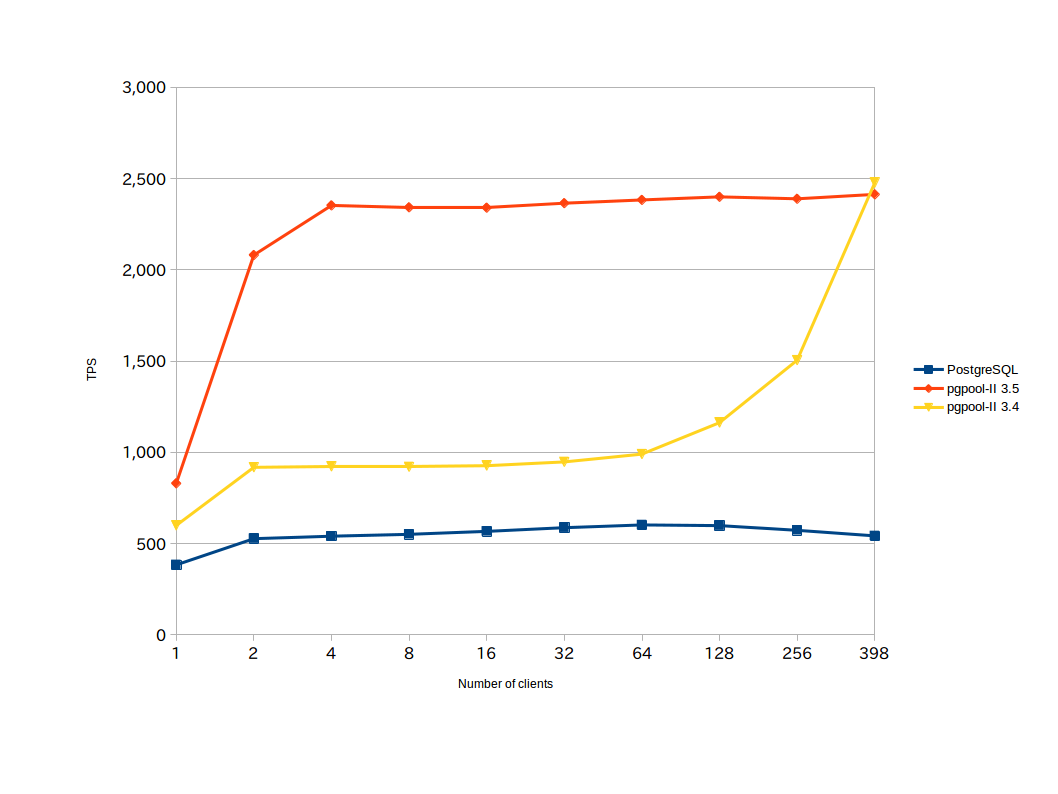 What is the thundering herd problem anyway?

The thundering herd problem occurs when a large number of processes

waiting for an event are awoken when that event occurs, but only one process is able to proceed at a time. After the processes wake up, they all demand the resource and a decision must be made as to which process can continue. After the decision is made, the remaining processes are put back to sleep, only to all wake up again to request

Pgpool-II forks off child process and wait for connection requests from clients. When a request arrives only one of them can accept the request. Other process just are awoken and sleep again. Pgpool-II 3.5 allow only one process to accept the request by using semaphore and never let other process awoken except the process which had been waiting for the semaphore. This eliminates the thundering herd problem. To enable the functionality, you must turn on the new parameter serialize_accept in pgpool.conf. Also child_life_time must be disabled (set to 0), which is due to an limitation of current implementation. Note that the method is most effective when num_init_children is large and the number of concurrent clients is relatively small. In our test case, pgpool-II 3.5 is 40% to 150% faster than 3.4.

The graph left shows how pgpool-II 3.5 putperforms 3.4. We set everything (pgpool-II, PostgreSQL and pgbench) on a laptop which has 16GB mem and 512 GB SSD, running Ubuntu 14.04. We start pgbench with -C option which repeats connect and disconnect to pgpool-II to simulate the thundering herd problem. Note that the blue line shows raw PostgreSQL TPS for comparison. pgbench repeatedly connects and disconnects to PostgreSQL, which results in poor performance. This shows why we need connection pooling.

• The watchdog now considers the quorum in the cluster. And only performs node escalation (acquire delegate-IP) when the quorum in the cluster is complete, This is how watchdog ensures that even in case of network partitioning or momentary split-brain the watchdog cluster keep working smoothly and the IP conflict situation should not happen, because of multiple not trying to acquire same virtual IP.

• All pgpool-II nodes participating in the watchdog cluster make sure that the pgpool-II configuration of all nodes in the cluster is consistent so the user should not get any unwelcome surprise because of any configuration mistake at the time of node escalations.

• Watchdog nodes now have configurable watchdog node priority (wd_priority), This will give the users more control on which node should become a leader node when the cluster elects the master node.

• The new watchdog cluster always keeps exchanging the periodic beacon messages and keep looking for problems like split-brain syndrome and automatically recover from it.

• Now user can provide scripts to be executed at time of escalation and de-escalation to master/leader nodes, This allows the pgpool-II watchdog to work on the different flavors of network (cloud platforms) where acquiring and releasing of virtual/elastic IP requires proprietary scripts/commands.

The whole PCP system, both server and client side get a major overhaul in pgpool-II 3.5. Apart from the code refactoring that significantly improves the manageability and maintanibility of the of PCP library and front-end clients, the overhauled PCP adds the following new features.

• The PCP communication protocol is enhanced and now more detailed PostgreSQL style ERROR and DEBUG messages can be delivered from the PCP server to the front-ends, This change not only makes the message style of the PCP system more in line with the rest of pgpool-II but also helps in making the user experience of PCP more enhanced by providing the user with detailed error and debug information.

• Traditionally the PCP server was single process and was able to only process one command at a time, After the overhauling pgpool-II PCP server can now handle multiple simultaneous PCP commands. The exception to this is pcp_recovery_node, Only one recovery command is allowed to run at one time.

• Your PCP password is now safe with pgpool-II 3.5. PCP utilities used to accept PCP password as a command line argument, which was a big security flaw. That password in the command line could easily be captured using the ps command. Now in the overhauled version of the PCP system all the utilities get the password from password prompt or can also read it from the .password file. PCP client side uses the PCPPASSFILE environment variable which can be used to provide the patch of the .password file.

Pgpool-II has a built-in SQL parser which is used for mainly query dispatching and load balancing. The parser is being imported from PostgreSQL. Pgpool-II 3.4's SQL parser was imported from PostgreSQL 9.4 and does not understand new syntax employed in PostgreSQL 9.5. Those queries the parser does not know are sent to the primary node and are never load balanced, which makes pgpool-II less effective when it needs to handle those queries.

Pgpool-II 3.5 imports the SQL parser from PostgreSQL 9.5 and it can understand new syntax introduced in PostgreSQL 9.5. Especially GROUPING SET, CUBE, ROLLUP and TABLESAMPLE, now can be be load balanced and can be used in query cache. Of course pgpool-II 3.5 understands PostgreSQL syntax used in 9.4 as well.

show pool_nodes which briefly describes the status of each backend now shows how many SELECTs are issued to them. So you can quickly recognize the effect of load balancing for example.